US attorneys were seeking a trial date in early 2008 because of what they said were large amounts of electronic evidence, including data from emails and computer servers, that must be handed over to Abujihaad’s lawyers.
Conspiracy charge
Mark Kravitz, the judge of the federal district court said another pre-trial hearing will be held in six weeks to check the progress of Abujihaad’s lawyer in building a defence.
Documents previously filed to the court allege Azzam was part of a conspiracy to provide material support and communications links to people engaged in terrorism.
The charges are related to disclosure of a US Navy battle group’s movements as it travelled from California to the Gulf in 2001, the government says.
The suspected disclosures occurred months after suicide bombers attacked the USS Cole during a refuelling stop in Yemen in October 2000, killing 17 sailors and injuring dozens more.
The charges were brought in Connecticut because the Azzam Publications web sites were hosted for a time on servers in the state.
The government says Abujihaad sent e-mails to members of Azzam while he was on active duty in the Middle East and stationed aboard the USS Benfold, a ship in the battle group whose movements were disclosed.
Abujihaad was discharged from the navy in 2002. Another pre-trial hearing has been scheduled for May 22.
Source : News Agencies 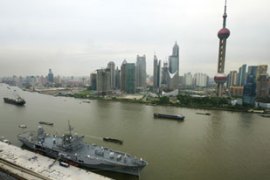 US sailor arrested on spying charge

Hassan Abujihaad is accused of contacting al-Qaeda while serving on the USS Benfold.