Yushchenko called for elections to be held on May 27 but Yanukovich urged him to return to negotiations.
Legality
The prime minister’s party also plans to challenge the legality of the dissolution order.
On Tuesday, Yushchenko met police and military leaders, telling them that their “key mission is to stay out of politics”.
The political crisis is the most serious since Yushchenko swept to power in 2004 on the back of the Orange Revolution which rejected Russian interference in Ukrainian politics.
But since the victory Yushchenko has seen his power eroded by Yanukovich, the man he defeated in 2004.
A breakdown of a power-sharing agreement on Monday between Yushchenko, who has the West’s support and Yanukovich, supported by Russia, led to the standoff.
Rivalry
Yushchenko accused the prime minister of failing to offer guaranteed support for his domestic and foreign policies, as agreed in August, in exchange for returning to office.
The rivalry between the two has remained sharp throughout the eight months they have shared power.
Although the leaders have different opinions over whether Ukraine should join Nato, much of the wrangling is seen as efforts by their financial backers seeking to protect business interests.
Yushchenko’s supporters who held a big demonstration over the weekend said late on Tuesday that there were no plans to organise new rallies.
The leaders are seeking help from Europe to resolve the standoff.
Source : News Agencies 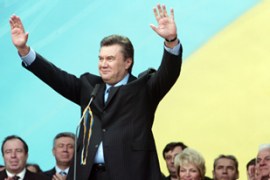 Yushchenko dissolves assembly but it hits back by halting funds for fresh polls. 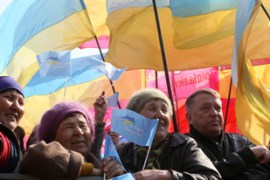 Noisy rallies are held amid deepening feud between president and prime minister.