“Photo opportunities and/or meetings with President Assad lead the Assad government to believe they’re part of the mainstream of the international community when, in fact, they’re a state sponsor of terror,” he said.
But Pelosi, who has also visited Israel and Lebanon in her tour of the Middle East, noted that Republican legislators had met al-Assad on Sunday without comment from the White House.
“I think that it was an excellent idea for them to go,” she said. “And I think it’s an excellent idea for us to go as well.”
The US president, who is engaged in a political struggle with the Democrat-dominated congress over funding for the war in Iraq, has consistently accused Syria of sponsoring terrorism and not doing enough to prevent foreign fighters from crossing into Iraq or reining in Hamas and Hezbollah.
Pelosi, on her second visit to the Middle East since becoming House speaker in January, has shrugged off criticism from the White House saying it was a good opportunity to gather facts and build some confidence.
Engaging Syria
The bipartisan Iraq Study Group recommended in its report last year that the US begin direct and extensive talks about Iraq with Syria and Iran.
The Bush administration rejected the idea but recently agreed to allow US representatives to talk to Syrian officials at an international conference in Baghdad.
Pelosi’s office said her trip was appropriate.
“The Iraq Study Group recommended a diplomatic effort that should include ‘every country that has an interest in avoiding a chaotic Iraq’,” Drew Hamill, her deputy press secretary, said.
“This effort should certainly include Syria.”
Pelosi and her delegation were welcomed at Damascus airport by the Walid al-Moualem, the Syrian foreign minister, and given a red carpet reception on Tuesday.
Source : News Agencies 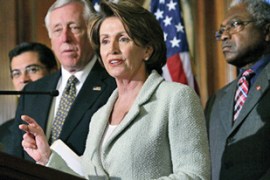 US House leader to visit Syria