But Ruddock said the Australian government would not legally be able to  extradite Hicks back to the US if he spoke to the media.
“In Australia, we have a position about freedom of speech,” Ruddock told ABC television late on Tuesday.
“I’ll leave it to your imagination as to a way in which somebody seeking extradition in relation to a party for breaching a so-called gag order would be able to be delivered up through the judicial processes in Australia.”
Asked if nothing would happen if Hicks spoke to the media, Ruddock said: “I suspect you are probably right.”
He said the US would be able to enforce that part of the plea bargain only if Hicks was “within their reach”, but added that Hicks may breach Australian law if he tries to benefit financially by selling his story.
Hicks agreed to the plea bargain condition of not speaking to the media for a year or from alleging mistreatment while he was in Guantanamo.
He is scheduled to be returned home within days to serve nine months in an Adelaide prison.
But Mori said Hicks, who spent five years in Guantanamo without charge after being captured in Afghanistan in 2001, could be forced to serve the remainder of a seven-year suspended sentence in the US if he violated the provisions of the plea deal.
“He could potentially be brought back to Guantanamo to serve it,” he said.
Source: News Agencies 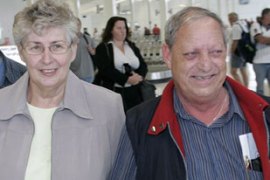