“The war has not changed the reality … We will recover what is ours,” Scioli said and urged Britain to sit down for negotiations on the islands.

“We will do so firmly,” Taiana said in the southern city of Rio Grande, where thousands of people attended a vigil honouring the 649 Argentinian soldiers killed in the conflict.

Taiana had earlier dismissed an expression of “continuing regret” from his British counterpart Margaret Beckett and accused London of military triumphalism in its commemorative plans.

“What they want to do is not what [Tony Blair] called a  commemoration, but a triumphant military parade, a typical gesture of arrogance,” he said on Sunday.

Argentina maintains a claim of sovereignty over the islands it calls the Malvinas in its constitution, and has spent the week prior to the anniversary reasserting its position.

The government unilaterally cancelled a bilateral oil exploration agreement with Britain and announced sanctions against companies exploring in the disputed area around the islands.

More than 900 people died including 649 Argentinians, 255 British troops and three islanders during the fighting which took place in the air, on land and at sea before Argentina surrendered on June 14.

The defeat is still very much an open wound for Argentinian society and for its veterans.

Guillermo Diaz was a 19-year-old conscript when he was held as a prisoner of war in the islands’ capital, Port Stanley.

Accompanied by Al Jazeera’s Lucia Newman, he returned to the islands for the first time in 25 years.

Breaking down in tears, Diaz described how “this where I left my youth, my immaturity. A part of me was left here and I had to come back to get it.”

“From now on my life will change for the better. I needed to do this in peace.”

Visiting the cemetery where the remains of 232 Argentine soldiers lay, including his friend Eduardo, Diaz was dismayed not find the names of many of the dead with the tombs only reading “here lies an Argentine soldier, known only to God”.

The British took most of its soldiers home for burial, but not Argentina.

Diaz said this was “because it is proof of our sovereignty. They are our custodians that show this is Argentinian land.”

Humiliated in defeat, Argentina turned its back on many of its veterans and for almost a decade they received no pension or health benefits and no help to treat post traumatic stress disorder.

Enrique de Rosas, a post-trauma specialist, said: “The government preferred to deny the problem and … the help that has to be immediate, comes too late.”

The result is that more than 450 former Argentinian soldiers committed suicide after the war.

Kirchner, who decided not to attend the ceremony in Ushuaia on Monday, has made the Falklands claim a strategic part of his foreign policy since his election in 2003, telling the UN he would seek a peaceful track.

Britain and Argentina re-established diplomatic relations in 1990 but despite efforts at reconciliation in recent years, ties remain problematic and Argentina rejected an invitation to a joint commemoration service in London to mark the 25th anniversary. 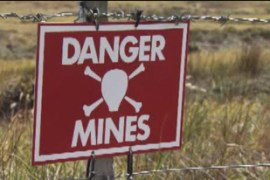 Islands’ economy booming 25 years after the conflict in which 900 people died. 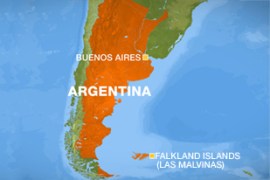