The 10,000-seat coliseum was filled to capacity with many students and staff wearing the university’s burnt orange and maroon colours.

Josh Rushing, Al Jazeera’s US analyst, was in Blacksburg and said that prior to the event the queues for the memorial was at least eight wide and stretched as far as the eye could see, with people waiting for hours.

He said as soon as the coliseum was full, the football stadium was opened where mourners could witness the service on big screens.
Rushing said such a large turnout was remarkable for what is essentially a small rural town.
He said that many of the students and residents he spoke to were still in a state of shock and did not realise the tragedy had made global headlines.
Global shock
Among the global reaction was from Cho’s original home.

Cho Byung-jae, an official at the South Korean foreign ministry, said on Tuesday: “The government expresses indescribable surprise and shock over this shooting incident.”

Among other foreign governments to offer condolences was Iran.
Mohammad Ali Hosseini, a foreign ministry spokesman, said the massacre was “against divine and humanitarian values”.
Earlier, background information had begun to emerge on the man police named as responsible for the killings.
Cho, 23, was described as a troubled loner whose behaviour leading up to Monday’s attacks had become increasingly erratic, including summiting creative writing so steeped in violence, it alarmed his professors who referred him for counselling.
He immigrated to the US 15 years ago and grew up in suburban Washington DC. 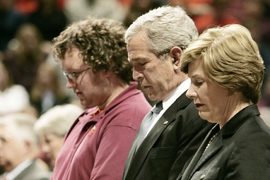 Bush said the entire US was grieving [Reuters]

He killed himself after opening fire in four classrooms where he apparently chained doors to prevent victims from escaping, officials said.

He was also blamed for killing two other people hours earlier at a dormitory on the campus in southwestern Virginia.
There was no official word on a motive for the attacks.
But the Chicago Tribune quoted investigative sources as saying Cho, who was studying English literature, left behind a note full of invective and had shown recent signs of aberrant behaviour, including starting a fire in a dormitory room and allegedly stalking some women.
The note believed to have been written by Cho was found in his room and railed against “rich kids”, “debauchery” and “deceitful charlatans” on campus, the Chicago Tribune said.
Source : Al Jazeera, News Agencies
More from News