But the Reuters news agency reported an unnamed Israeli source as saying that a “special unit” of Israeli border police had identified Hanaisha “as a senior operative in the area and surrounded the vehicle in which he was travelling”.
“The force saw that he had drawn his weapon. They fired at him and he was killed,” the source said.
Local residents said the undercover troops drove a blue civilian car that cut off the vehicle
They said the Israeli troops shot Hanaisha after ordering the other passengers to flee.
Drive-by attack
Earlier, Palestinian fighters shot and wounded four Israelis in a car near a Jewish settlement of Naaleh in the occupied West Bank, according to the Israeli army.
“One was wounded seriously and three others lightly. The four were driving in a car when they were shot at by fire from another vehicle,” an Israeli army spokesman said.
The al-Aqsa Martyrs Brigades has claimed responsibility for the drive-by attack, but it was unclear whether the Israeli operation near Jenin was undertaken in response to the attack.
The violence coincides with the annual Palestinian “Prisoners Day”, in which vigils and rallies are held in the West Bank and Gaza to press Israel to release 11,000 jailed Palestinians.
Source: News Agencies 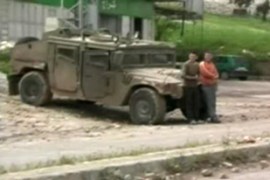 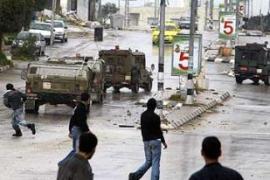 Two Palestinian fighters are killed in the West Bank city of Nablus.