Politicians targeted
More than 160 suspects have been detained in cases that have embroiled members of both of the country’s main political parties – Zia’s Bangladesh Nationalist Party (BNP) and the Awami League headed by her rival, Sheikh Hasina Wajed, former prime minister.
Police or government officials were not immediately available to comment.
Prothom Alo quoting unnamed official sources said Arafat was being questioned about alleged corruption in his business in advertisement and river ferries.
Last month, a Bangladesh court accepted extortion charges filed against Zia’s eldest son, who is also a senior leader of the BNP.
Tarique Rahman case
Police investigators formally filed charges with a magistrate’s court against Tarique for allegedly extorting $147,000 from a construction company.
Tarique, awaiting trial in jail, has denied the charges.
Last Friday, security forces arrested Moudud Ahmed, a former law and justice minister, at his residence in Dhaka.

Ahmed, who was a senior minister in Khaleda Zia’s government, was detained by security forces at his home in Gulshan diplomatic district and driven to an unknown destination.

Earlier this month, police charged the Awami League head and more than 50 others in connection with the murder of four people during political violence in Dhaka in October.
A police officer said the case against Hasina, who is currently in the US, would be heard on April 22.

The four alleged victims were beaten to death during clashes between the Awami League and Jamaat-e-Islami party activists.
Hasina delayed her return after a businessman lodged a complaint with police that she had extorted 30 million taka ($400,000) while in power before 2001. 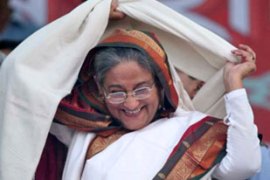 Extortions claim against Sheikh Hasina may trigger her arrest on return from US. 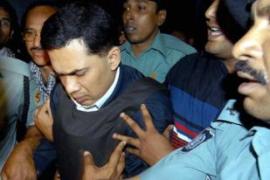 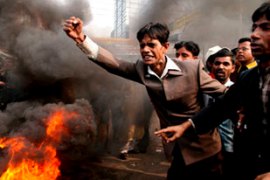