The police said that they had also arrested the “mastermind” of a group responsible for several recent suicide attacks in Casablanca, along with his deputy.

They said that the men had been questioned and had provided information on the group’s other members and targets.

The two men were arrested in the shantytown of Sidi Moumen, on the outskirts of the city, in the course of the police follow-up to Tuesday’s blasts.
Police said they had discovered where the gang were making their  explosives and had also been able to identify the rest of the group and were actively looking for them.

Security officials said on Wednesday that they believed the group was composed of up to ten would-be suicide bombers.

One asked for access to the building, but when questioned, he and the other bomber set off their explosives, security officials said.

Officials and witnesses said that Saturday’s suicide bombers had attempted to attack US targets in Casablanca.
“There is no doubt they aimed at the US targets. They made that statement with their own bodies,” a senior police source told Reuters.

Other witnesses said that one man approached the US consulate and the other the cultural centre before blowing themselves up one minute apart.

Three suicide bombers blew themselves up in Casablanca on Tuesday  and police shot and killed a fourth man who appeared to be preparing to detonate explosives, authorities said.

Police had been pursuing the men in connection with an explosion in an internet cafe in the city on March 11.

An internet statement purportedly from al-Qaeda claimed responsibility for the bombings but the government in Rabat insists that the bombers were “home-grown” with no links to international groups. 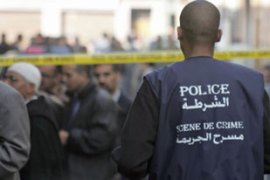