Suleiman on Thursday told a top Israeli parliamentary panel that Syria and Israel could clinch a peace deal in six months.

“Like everyone else who proposed playing a role in the peace process, Mr Suleiman heard Syria‘s position which rejects secret negotiations,” the official said.

Suleiman and Alon Liel, a former Israeli foreign ministry director general, say they headed two years of the secret talks during which understandings were reached for a peace treaty between Syria and Israel.

Suleiman, 60, was at the centre of the official peace talks between Israel and Syria which began following the Madrid peace summit, including the 1996 US-sponsored talks at Wye Plantation and later in 2000 in Shepherdstown.

During those talks, Suleiman said on Thursday, “the sides solved 80 per cent of disagreements”.

He said that he and Liel had succeeded in further narrowing the gap between the sides, and that their talks should be replaced by official negotiations.

“Our work is done, now it’s up to officials in Israel and Syria to sit down and iron out their differences,” the US businessman said. “We gave them a peace map.”

Syria‘s “President Bashar al-Assad wants peace with Israel. He wants to make peace and be known as the man of peace,” Suleiman said. 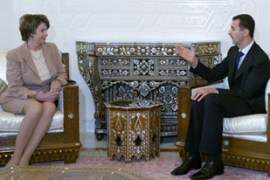