After Norway‘s liberation, Fleicsher and the other war children say they were treated appallingly. Fleicsher was bullied at school and abused by her stepfather.

“I never fought in the war, I never started it. I never ended it. I didn’t participate. I was a product of it,” she told Al Jazeera.

In the period 1940 to 1945, half a million Germans occupied Norway. The Nazi policy of ‘Lebensborn’ (Source of Life) encouraged soldiers to father children with local women who were considered desirable stock for an Aryan master race.

‘Children of the hated’

After the war, these children became a hated symbol of the occupation. They were discriminated against, and some ended up in orphanages and mental institutions.

The building which is now home to the Resistance Museum in Oslo was used by the Nazis to imprison and execute Norwegian resistance fighters during the Second World War. They are commemorated at the museum, but there is no mention of the Lebensborn children.

The Norwegian government has apologised and offered limited compensation, but has maintained there was no systematic abuse.

Hadia Tajik, a junior adviser from the Norweigian ministry of labour and social inclusion said: “The Norwegian government has never ill-treated war children, on the contrary, we have done our very best to include them.”

But Fleicsher has said that they have never been included. For this reason, she and another 150 ‘war children’ have taken their fight to the European Court of Justice.

“The fact that no one ever stepped forward [means] discrimination is not over.”

“We are still the children of the hated.” 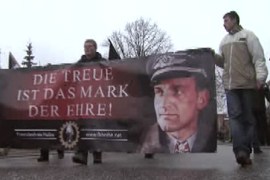 German neo-Nazis on the march

In the second report on the rise of the right in Europe Al Jazeera visits Germany. 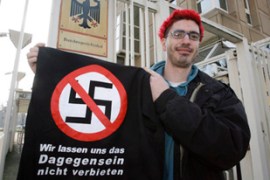 Nobel author under fire for Nazi past

Guenter Grass, the German Nobel-prizewinning author, is being urged to give up his honorary citizenship of Gdansk after he revealed that he was once a member of the SS.

Nazi victims can sue for interest

Victims of Nazi-era crimes can pursue additional money from the German companies that paid $2.5billion into a reparation fund for US claims, a US federal appeals court has ruled.