“There may be some humanitarian considerations that could temper that in certain cases but prima facie, no.” Howard said.

He added he would look at changing the law to stop HIV-positive people coming to Australia.

“I think we should have the most stringent possible conditions in relation to that nationwide and I know the health minister is concerned about that and is examining ways of tightening things up and I think people are entitled to be concerned.”

Aids experts attacked the comments as an overreaction.

“It is already extremely difficult for people with HIV infection to be accepted as migrants or refugees,” The Australian newspaper on Saturday quoted Don Baxter of the Australian Federation of Aids Organisations as saying.

“Those people accepted, chiefly spouses and partners of Australian citizens, can and do contribute enormously to Australia‘s benefit.”

Others said the comments were discriminatory.

“I think to not allow people to come on the basis of any health condition is immoral, it’s unethical and it’s impractical to enforce,” Lemoh said.

“Most of the people who acquire HIV acquire it here and most of them are born here.” 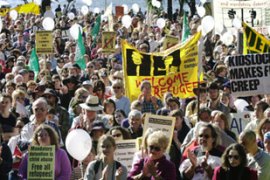