“Their terrorists were trained by the Taliban in Afghanistan and sent to China by them,” Shi Dagang said during a news conference at China’s annual legislative session in Beijing.

He also claimed that more than 1,500 semi-assembled grenades were seized in the raid east of China’s border with Kyrgyzstan.

About two dozen Uighurs were captured by US forces in Afghanistan during the invasion which followed the September 11 attacks.
China has demanded their return, but the United States fears they might face persecution there. Five Uighurs were sent to Albania last year so that they did not have to return to China.
Separatist movement

“There has been a separatist movement in Xinjiang for quite some time but its unlikely that it really is motivated by extremists, particularly religious extremists,” Tony Cheng, Al Jazeera’s Beijing correspondent, said.

“The Uighurs who live there are very different to the Han Chinese in the other parts of China and have been fighting for a long time to viewed separately, for religious freedom and to be treated as a separate entity by the government.”

The Uighurs are Turkic-speaking Muslims with a language and culture distinct from the majority of Chinese. Many resent the growing Han Chinese presence in the region, as well as government controls on religion and culture.

Ismail Tiliwaldi, a Uighur member of the Chinese parliament, however said that Uighurs supported the central government and echoed Chinese criticised on the ETIM.
“Their aim is to carry out terrorism and splittism, to damage our country’s security,” Tiliwaldi said.
“Now, the unity and stability situation in Xinjiang is firmer and firmer. The space for activities of the East Turkestan terrorist forces is smaller and smaller, because there are more goodies and less baddies.”
Exile groups criticise China
Representatives of foriegn-based organisations which lobby for China’s Uighurs cast doubt on the new Chinese claims.
“The real Uighurs aren’t involved in terrorism. They just want their political rights,” Dilxat Raxit, spokesman for the exiled World Uighur Congress, said in a telephone interview with the Associated Press news agency.

He also questioned the legitimacy of the Uighurs who were in the Chinese parliament, saying they had been hand-picked by the Chinese government.

“These people and their statements are just a sham intended to fool international opinion,” Raxit said.

The World Uighur Congress is headed by Rebiya Kadeer who was jailed for more than five years before being sent into exile in the United States in 2005, where her championing of her people’s rights has led supporters to dub her the “mother of the Uighur people”.

During the news conference in Beijing, she was condemned by Ismail Tiliwaldi, chairman of the Xinjiang Uighur region.

“Rebiya Kadeer violated China’s national security. We let her leave to seek medical treatment in the US out of humanitarian concerns. She got sucked into the embrace of certain minority people groups,” he said.

Tiliwaldi declined to answer questions about Kadeer’s third son, Ablikim Abdiriyim, who Amnesty International said has been tried in secret by a Chinese court after being severely beaten while in detention.

He was tried on charges of separatism, subversion and sending information over the internet to his mother, Amnesty said on Friday. It was unclear what sentence was passed. 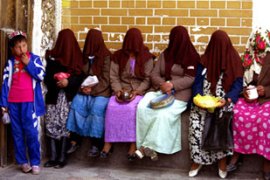