About 200 Brazilian demonstrators, mostly students, protested against Bush’s tour, and chanted: “Bush, chief of terrorism, we don’t want you in Latin America.”

On the first leg of a five-nation tour, Bush met Luiz Inacio Lula da Silva, Brazilian president and leftist ally that Washington sees as a potential counterweight to Chavez.

The two announced an ethanol fuel development plan for the Americas.

Bush’s “ethanol diplomacy” plus new aid pledges are seen as an attempt to offset Chavez’s use of Venezuela’s oil wealth to court a new generation of Latin American leftist leaders in his quest for a region-wide socialist revolution.

Chavez said: “He’s a symbol of domination and we are a cry of rebellion against the domination … he’s trying to trick our people to divide us.”

“My trip down down here is to remind our country that South America, Latin America are good places to invest … particularly in countries that adhere to rule of law and are transparent and believe in the fundamentals of freedom,” he said in veiled swipe at Chavez’s anti-capitalist policies.

The Bush administration has dismissed frequent verbal attacks by Chavez, who called Bush the devil during a UN speech last year, and has questioned his commitment to democracy while criticising his nationalisation plans.

Bush acknowledged a perception that “our back has been turned” on Latin America but insisted: “The facts certainly dispel that … We care about our neighbourhood a lot.”

Bush said he doubled US aid to the region to $1.6 billion last year from the start of his administration, describing it as “social justice money”.

Until now, Bush has mostly stressed trade, drug enforcement and immigration controls in the region. 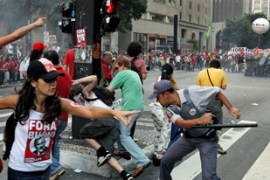 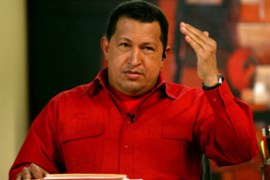 Chavez accuses US of sabotage plan