The vote was scheduled for Monday in parliament after the motion was presented last month by 10 members of parliament.
Sheikh Ahmad would have had to step down if MPs had voted against him.
However the cabinet’s resignation automatically cancels the parliament session.
Parliamentary opposition
Sheikh Ahmad had refused to resign, resulting in a stand-off between the elected parliament and the government.
The emir, Sheikh Sabah al-Ahmad Al Sabah, must now either appoint a new prime minister to form a government or ask existing prime minister Sheikh Nasser to find a new line-up.
Members of parliament expect him to keep Sheikh Nasser on.
The emir had the option of dissolving parliament to avoid the vote, but political sources had said that was unlikely because, though he has done so before, it would have caused a constitutional crisis.
The emir dissolved parliament last year after a stand-off between the government and opposition over reforms.
Kuwait’s parliament has a history of challenging the cabinet, whose prime minister must be from the ruling family.
‘Mistakes made’
In December, Mohammad al-Sanousi, the information minister, resigned a day ahead of an expected grilling by an Islamist MP, but it is far more sensitive for a member of the ruling family to be removed by an elected body.
Sheikh Ahmad was named acting information minister after al-Sanousi’s resignation.
He said in parliament last month that mistakes had been made in his ministry.
Opposition MPs have also threatened to question several other ministers on various charges, including one of corruption.
Source: News Agencies

Kuwait’s new cabinet has approved a draft law reducing the number of constituencies in the Gulf state – a key demand of the opposition. 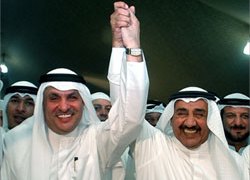 Islamist and reformist candidates have swept Kuwait’s elections but women have failed to win a single seat in their first attempt to run for parliament.