Estonia remains one of the poorest countries in the EU. High inflation, 5.1 per cent in January, has delayed Estonia’s entry to the euro zone, intended for this year. Ansip says 2010 is a realistic target.

He has been in power since April 2005 and has overseen economic growth of more than 11 per cent.

Ansip now has to either re-form a government with the Centre party or turn to the more like-minded conservatives of Pro Patria-Res Publica.

The election was the first to be won by a sitting prime minister since Estonia left the Soviet Union in 1991 and the first ever to be held partially via the internet.

Celebrating to the sounds of Queen’s We are the Champions, Ansip said nothing was excluded.

“It is not important if there are two, three or four partners in the coalition – what is important is their programmes and promises,” he said.

Coalition talks could be hard and protracted, lasting as long as a month.

Ansip and the Centre party had ruled with a third, smaller coalition partner, the People’s Union, which won six seats in the election.

Reform and Pro Patria now need a third party to achieve a majority, but the Centre party would be an unlikely partner in such a coalition.

The election was overshadowed by increased tensions with Russia, which may have helped Pro Patria.

The tensions were sparked when parliament voted to remove a statue of a Red Army soldier from the centre of the capital, Tallinn, because it was a reminder of 50 years of Soviet rule.

Russia called the plan blasphemous to the memories of the fighters against fascism.

Another source of tension has been Estonia’s 300,000 Russian-speakers. Moscow says the Baltic state has discriminated against them since the collapse of the Soviet Union in 1991.

About 100,000 of them could vote. Others are either citizens of Russia or so-called non-citizens, without the right to vote in national parliamentary elections.

Neither of the two Russian-speaking parties in the election won a place a parliament.

Overall turnout in the election rose to 61 per cent from 58 per cent in the last election in 2003. 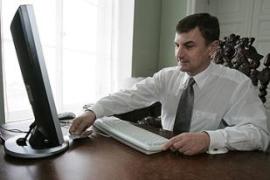 Voters head to polling booths with the ruling coalition expected to retain power.