But Khalaf cast doubt on whether the 14 slain policemen were the same men shown in photographs accompanying the original website statement.

“We found the 14 policemen’s bodies, but they are not those who are in the fabricated images on the website,” he told The Associated Press.

“The Diyala police told us that they don’t know those people shown on the website were,” he said.

Nonetheless, he blamed al-Qaeda for the killings, saying Iraqi authorities would “chase those who assassinated these unarmed people.”

Uday al-Khadran, mayor of the police officers’ home town of Khalis, said; “They were found in the streets of Baquba. Their throats had been cut and their hands were bound.”

The first statement from the Islamic State of Iraq said 18 men were being held in retaliation for the alleged rape of a Sunni woman by three members of the Shia-dominated police.

The photographs accompanying the claim showed up to 18 blindfolded men. Seven were wearing Iraqi military uniforms, and all had their hands tied behind their backs.

The group had threatened to kill the hostages within 24 hours if the Iraqi government did not hand over officers accused in the rape case, and release all Sunni women held in Iraqi prisons.

The threat surfaced on websites early on Friday, but it was unclear when the 24 hours began.

“This blessed operation is a response to crimes carried out by those infidels in their fight against the Sunnis,” the statement said.

“The latest of the crimes committed by these traitors was to rape our sister in religion.”

“Sabrin al-Janabi did come and say that she was raped by three Iraqi security forces. The government at first reacted by saying that it will conduct an investigation,” she said.

“Hours later, the government came back and said the three men were cleared of that accusation, that Sabrin al-Janabi had come out with false accusations, and that the three men would each be given a medal of honour.

“That has caused a big uproar among the Sunni groups,” Abdel Hamid said, adding that al-Janabi’s identity was still confused.

“A few days later, both the prime minister’s office and the Iraqi Islamic Party – which is the biggest Sunni party here – said her name was not really Sabrin al-Janabi, that she had used a false name and that she was of Shia origin,” she said.

The other blast was near a police patrol in southwest Baghdad, killing a policeman and wounding two civilians, police reported. 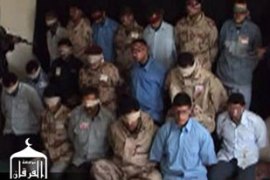