The helicopter was downed after Ethiopian troops supporting the interim Somali government launched air attacks on armed groups for the first time since the start of the year.

Ethiopia said on Friday its military has killed 200 armed opponents during a major offensive in the capital.

“Ethiopia has killed 200 armed remnants of the Islamic Courts Union and wounded many others,” Ethiopia’s information ministry said in a statement broadcast on national television.

One was making a surveillance and the other one was dropping several bombs.”

He said the bombs fell near a former market in the northern part of the capital.
Earlier on Friday morning, a mortar shell struck a residential area in the south of Mogadishu, the capital, residents said.
Gunfire has also been reported near the presidential palace.
Worst fighting
The ICRC said on Friday that it deplored the heavy civilian toll, in what it said was the worst fighting in Mogadishu for 15 years.
More than 200 people, mostly civilians, had been admitted to the city’s main Keysaney and Medina hospitals in the 24 hours since Thursday morning, the ICRC said in a statement.
“The population of Mogadishu is caught up in the worst fighting in more than 15 years.
For his part, Ban Ki-moon, the UN secretary-general, expressed concern over the use of helicopters to attack positions inside the city.
Ban is “particularly concerned about the use of air strikes and the introduction of tanks and heavy artillery into densely populated parts of the city, further increasing the security threat to large numbers of civilians,” Farhan Haq, a UN associate spokesman, said in New York.
Ban called for an immediate halt to the fighting.
Thursday’s battles
Seven Ethiopian soldiers were said to have been killed on Thursday, with witnesses in the southern district of Shirkole reporting the bodies of Ethiopian troops were dragged through the streets.

Loudspeakers transmitted calls for residents to come out and fight the Ethiopian troops.

The scenes echoed violence last week, when crowds burned the bodies of two dead Somali soldiers.
The fighting on Thursday brought an end to a ceasefire agreement in place since the weekend.
But Mohamed Mohamud Husein, a spokesman for the Somali president, said the fighting marked the beginning of a three-day push to restore order in Mogadishu, as Ethiopian troops, who helped the Somali government oust Islamic courts fighters last year, withdraw from the capital.
Source : News Agencies Government orders residents to leave parts of the capital for “security reasons”. Bodies of soldiers dragged through the streets and burnt after deadly clashes. 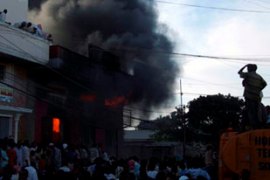 Fighting breaks out between Ethiopian troops and Somali groups in Mogadishu. 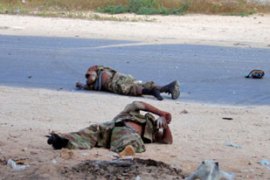 Red Cross says Mogadishu civilians are caught up in the worst fighting in 15 years.