Yushchenko laid out his case against his political rival, Viktor Yanukovych, the premier, accusing the ruling coalition of breaking promises and trying to usurp power.

“If the parliamentary majority does not return to working in accordance with the constitution I will sign a decree dissolving  parliament,” Yushchenko told a conference of his party’s delegates, prompting wild cheers and applause.

Later, Yushchenko said: “I want to say openly that I am ready for such action.”

On Saturday, his party passed a resolution appealing for parliament to be dissolved and his former Orange Revolution allies began gathering supporters on Kiev‘s Independence Square.

The standoff arose after a group of about a dozen parliamentary members, allied with the president, defected to Yanukovych’s coalition, in violation of a new law that compels MPs to remain with the party they were elected with.

Yanukovych now boasts 260 members in the 450-seat house and his party has suggested they will soon reach 300 – enough to overturn presidential vetoes and make changes to the constitution.

Thousands of Yanukovych’s supporters filled Ukraine‘s European square, waving the party’s blue banner and the flags of his coalition partners, the Communists and Socialists.

Some 300 metres away, supporters of the former Orange Revolution allies began filling Independence Square, where rock music blared from speakers beside a giant stage.

The police asked people passing from one square to another to put away political flags and scarves but made no attempt to restrict people’s movement. 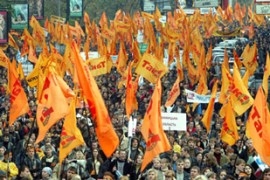