“The prime minister could not finalise the cabinet line-up. It is shameful.”
Parliament officials said the interim parliament, originally scheduled to meet on Saturday to approve the new cabinet, had been postponed until Koirala had held more talks with the Maoists and other parties.
A Maoist leader said they had no problem with the structure of the proposed administration.
“The Nepali Congress and the Communist Party of Nepal (Unified Marxist-Leninist) could not reach agreement regarding the ministerial hierarchy in the interim government,” said Dev Gurung.
Constituent assembly
Koirala was expected to resign only to be re-elected by parliament to head the interim government.
He will then announce a new multiparty cabinet that includes the Maoists.
The Maoists are already part of the interim parliament which they joined in January under a November peace deal which ened their 10-year armed campaign.
The interim government, when formed, will organise elections for a constituent assembly in June.
That is to map out the impoverished country’s political future, including that of the monarchy, which the Maoists want abolished.
Source : News Agencies 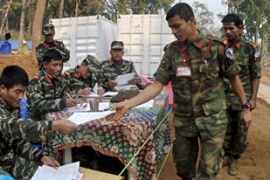 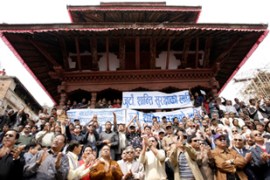 Dozens are killed as Maoist supporters clash with members of an ethnic group.