Hicks, who retained a stoic expression after the judge announced the result, earlier pleaded guilty to attending al-Qaeda training camps and volunteering to fight in support of the Taliban during the US-led invasion of Afghanistan.

The outcome was a reversal of fortune for the Australian former kangaroo skinner, who spent more than five years at the Guantanamo detention camp.

The US had come under heavy lobbying over the case from Australia‘s conservative government, which had been accused of failing to protect the interests of one of its citizens.

In a statement read out by his lawyer, Hicks apologised to his family, Australia and the US for his actions.

Under the plea deal, Hicks agreed to withdraw allegations he had been abused at the hands US personnel and is prohibited from speaking to the media for a year about the case.

His lawyer told the panel of military officers that Hicks deserved lenient punishment as he posed no threat and was sorry for his actions.

Mori said Hicks was a naive young man looking for battlefield experience after having been rejected for military service in his native Australia due to his only having an eighth grade education.

Mori called his client a mere “wannabe” soldier whose heart was not in al-Qaeda but who sought out training where he could, “because he didn’t have an education to be a real soldier”.

Recounting how Hicks fled from advancing Northern Alliance forces for three days, Mori said: “The ‘wannabe’ finally got a real taste of it, and he ran away.”

Calling Hicks “the enemy,” lead prosecutor Lieutenant-Colonel Kevin Chenail told the tribunal the Australian had knowingly sought out an organisation bent on attacking the US and acquired dangerous skills.

“Gentlemen, the global war on terrorism is real,” Chenail said.

“The enemy is sitting at the defence table … While he was training with Al-Qaeda he was not wearing a suit and tie, nor was he wearing a uniform.”

Chenail said Hicks had “fully embraced Al-Qaeda” and said he would have spent more time on the front line if he had not been captured.

US and Australian governments have agreed for him to serve time back home. 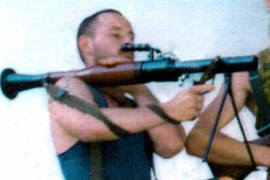