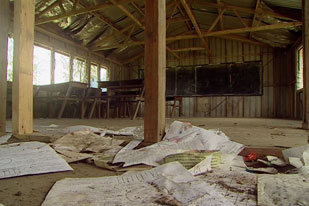 Porgera’s school has been abandoned
since the shootings in 2005

If police stormed into a primary school shooting 25 children, killing three, there would be outrage in most countries. But not, it seems, in Papua New Guinea, where the government has not even seen fit to carry out an independent investigation.

The incident took place on October 31 2005 in an isolated highland community and has gone virtually unnoticed in a society where police brutality has become common-place.

At Porgera primary school in the remote Enga province of Papua New Guinea, armed men rather than teachers patrol the playground.

Until the end of last year 700 children filled the classrooms dotted along the hillside. Now it lies ransacked and empty.

Leo Kuala is a local tribesman who witnessed the shooting. Walking through the school, pointing out bullet holes as he recounts the day the police came.

“Police tried to shoot the students and they missed and it went through the wall. Another child was hiding under those steps and was shot in the stomach. And there were more children hiding over there, they were shot in the legs.”

None of the children were carrying weapons he says. 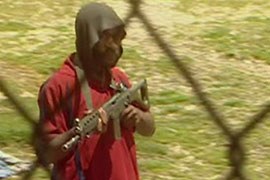 The official version is that the police had come to arrest the school’s headmaster for stealing money. When the children began throwing stones the police opened fire.

Robert Yockopua was one of the children in the school that day. The shootings came completely out of the blue, he says.

Two officers have since been charged over the incident, but no independent investigation has ever been carried out.

The school has since been ransacked by local tribes and the sad reality of this situation is that the students are now missing out on education.

Andiki Joe is another student who now has nothing to do. “I just stay at home,” he says. “My village is fighting so I’ll have to get involved with the fight.” 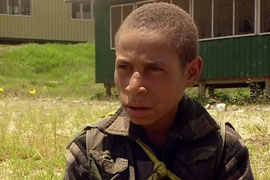 As disturbing as this story might be, it is an all too familiar one in Papua New Guinea.

The police force in this country has a long standing record of brutality, including shootings, beatings and even rape.

Human Rights Watch says the vast majority of people under the age of 18 who come into contact with the country’s police force are abused in some way.

But the prime minister, Grand Chief Sir Michael Somare, says there is no cause for alarm and sees no fault with the behaviour of the police force.

“When people want to be brutal, of course police has to retaliate,” he told Al Jazeera.

“In our case, the police has been excellent, they’ve been doing an extremely good job.” 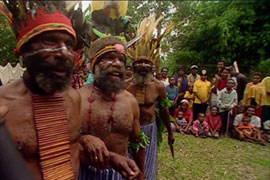 The incident at Porgera primary school is symptomatic of wider problems in Papua New Guinea.

The country is trying to hold on to its ancient tribal culture, but contemporary life often clashes with traditional beliefs.

Bruce Grant of UNICEF in Port Moresby says it is a problem almost impossible to solve.

“The current model of justice in Papua New Guinea doesn’t really fit the culture. PNG has over 800 cultures – it’s one of the most culturally dividerse societies in the world, so it’s hard to come up with one model that fits all,” he says.

For the police, tribal loyalties are often more important than the job.

Benson Kuala, a Porgera resident, says the situation in his town, like many communities, has seen many people arm themselves with knives and axes to take the law into their own hands.

“Our law and order situation here is out of hand,” he says, “totally out of hand”.