In the first of a series of special reports on the rise of the right Stephen Cole travels to the heart of Europe, Belgium, to look at the increasing influence of nationalists both federally and regionally.

In January the fireworks display over the night sky of Sofia celebrated not only the arrival of the new year but also the arrival of Bulgaria as one of the newest members of the European Union.

Other than Bulgarians, one man who had plenty of reason to smile was Bruno Gollnisch of France‘s National Front.

Gollnisch has spent years walking the long corridors of the European Parliament in Strasbourg defending his views and is currently appealing a conviction for Holocaust denial handed out along with a fine by a tribunal in Lyon in January.

But the arrival of Bulgaria and Romania meant six new recruits for Gollnisch, just enough to form the parliament’s first far right block, ITS, a day before his holocaust conviction.

ITS stands for Identity, Tradition and Sovereignty. It comprises 21 MEPs from seven countries and receives more than a million dollars a year from European taxpayers.

The parliamentary bloc signed a common charter on January 9, being formally recognised by the parliament a week later and one of its prominent members is Alessandra Mussolini, the granddaughter of the Italy’s twentieth-century fascist leader, Benito. 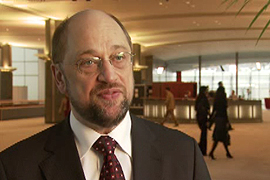 Schultz campaigns fiercely
against the rise of the far right

There are also representatives from the UK and Austria but it is the French national front that has the most members.

And it is Gollnisch himself, a close ally of French presidential candidate Jean-Marie Le Pen, who is the driving force.

He denies the allegations levelled against the new bloc.

“We are not anti-semitic,” he tells Al Jazeera.

“We are not racist, just against massive immigration policy.”Likewise he says the ITS “are not homophobes, [we] just defend traditional family values. We think that homosexuality is a matter of private life and that’s all.”

Three of Gollnisch’s allies are from Belgium’s Vlaams Belang who are celebrating doubling their vote, and number of parliamentary seats, in the country’s last election.

The packed conference hall in Ghent for the VB’s annual gathering is testament to the growing support the party enjoys.

Vlaams Belang means Flemish Interest and is the latest incarnation of a party previously known as Vlaams Blok that was forced to disband in 2004 after being convicted for “incitement to hate and discrimination” in a Belgian court.

One of the party’s senior mebers, Anke Van dermeersch, says her movement is being illegally targeted.

“Thoughts are free, your thoughts can’t be abolished,” she says. “We have our ideas, we want our way in our country, you can not abolish that, no legal court can do that.”

ITS has already been met with firm resistance in the European Parliament by Martin Schultz, a Socialist MEP who is campaigning to block its members from holding any significant posts.

“Democrats should never give space to those who want to use the democratic instruments to destroy democracy,” he says.

But despite the efforts of Schultz and many other politicians the ITS message is getting through. It appeals to some young people who see immigrants as job stealers who should be sent home.

Yurgen Knowens is one of those people. He spends his time organising marches protesting immigration in Belgium.

On one such march in Antwerp he tells Al Jazeera he is not against immigrant, but that he just wants one language and one culture.

“When you dont accept that you live here and you say I live here but I will stay who I am, and you do not adapt, then it is better that you go,” he says. 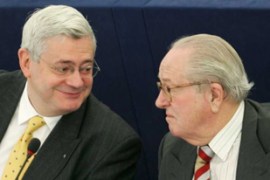