Paisley said he and Adams are to hold “regular” talks between now and May 8, after the pair held their first-ever face-to-face talks.

Adams, sitting a few feet away from Paisley, said in a separate statement that the accord “marks the beginning of a new era of politics on this island”.The two men did not shake hands for the cameras however.
Tony Blair, the British prime minister, described the accord as a “very important day”.

Blair wanted a successful deal to form part of his legacy as he leaves office later in the year.

“Everything we have done over the last 10 years has been a preparation for this moment,” he said.

Peter Hain, the British minister responsible for Northern Irish affairs, said the deal was better than he could have expected.

Hain had said on Sunday the deadline imposed by his government still meant “devolution or dissolution” of the province’s assembly in Belfast and he would not listen to any alternatives unless they were agreed by all parties.

More than 3,000 people died in 30 years of sectarian violence in Northern Ireland before the peace deal known as the Good Friday agreement was struck in 1998.

He has refused to share power with Sinn Fein, the former political wing of the IRA, until the organisation accepted the rule of British law and the IRA renounced violence.

The protestant preacher wanted the initial deadline postponed because of doubts over Sinn Fein’s support for the police force.

“We must never forget those who have suffered during the dark period from which we are, please God, emerging,” he said.

The IRA met Paisley’s central demand in 2005 when it pledged to disarm and pursue its aim of a united Ireland peacefully.

Adams and Sinn Fein, who want a united Ireland, had rejected the six-week delay and wanted the assembly to function immediately.

Hain signed an order on Sunday restoring devolved powers to assembly, in which the DUP and Sinn Fein dominate after elections earlier this month, to allow the parties to try to form an executive.

In a speech, partially delivered in Gaelic, Adams said the agreement “marks the beginning of a new era of politics on this island”.

Bertie Ahern, the Irish prime minister, added his support for the agreement, saying it would allow the leaders to “move forward from today in an entirely new spirit”.

The Stormont assembly has been suspended since October 2002 when allegations surfaced of a republican spy-ring operating at the assembly buildings. Northern Ireland has been governed directly from London ever since. 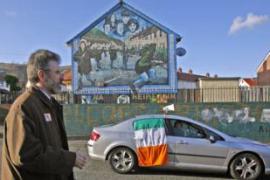 Quiet campaign amid mistrust between leading Protestant and Catholic parties.