Kyaw Hsan said the guidelines would be adopted at the next session of the national convention – a body that forms the first stage of the government’s seven-stage road map to democracy.

The government says the plan will pave the way to new elections in Myanmar, which has been under military rule since 1962.

“We know that the international community has some worries about the implementation of the seven-step road map,” Kyaw Hsan told reporters.

Commenting on allegations of abuse, he dismissed accusations that the military government was “threatening regional and international peace and security by committing acts such as ethnic cleansing, rapes, forced labour and forced resettlement at border areas”.

“In reality, those accusations are totally false and no such incidents occurred in Myanmar,” he said.

Kyaw Hsan instead blamed a rebel ethnic guerrilla group, the Karen National Union, and “expatriate terrorists” for risking lives by planting mines in the border areas.

It however refused to recognise the results after a landslide victory by the National League for Democracy led by Aung San Suu Kyi.

The Nobel peace prize winner has been in prison or under house arrest for 11 of the past 17 years. 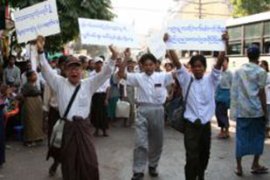 Some of the protesters were taken away by police in Myanmar’s capital. 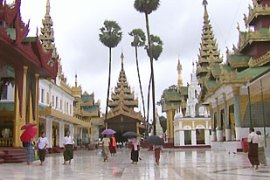 Military government rubbishes report that it kills members of the minority group.