Under the Armenian political system, the prime minister has mostly executive powers and is a much less powerful figure than the president.

“The main political priorities of Armenia are defined by the president … so the forced change of prime minister will not influence Armenia’s course,” said Sergei Antufeyev, a member of the Russian parliament’s committee for relations with other ex-Soviet states, according to the ITAR-Tass news agency.

Before entering politics, Margaryan worked in a number of government departments during the soviet era.

However in 1974 he was arrested for advocating Armenian independence, and was sentenced to two years’ in prison, according to his official biography. 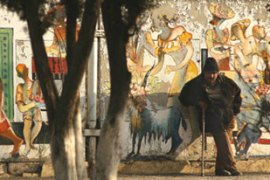 The separatist government of Nagorno-Karabakh continues to seek recognition.

What Armenia lacks in size and diplomatic muscle it makes up for in the strength of its four million Diaspora.