The so-called “march of the discontented” was organised by Other Russia, an opposition coalition, and follows a March 3 rally in St Petersburg that blocked the city’s main thoroughfare.
Protesters detained
Witnesses said that police had detained between 50 and 100 protesters had been detained and had prevented more than a thousand demonstrators from reaching the square in the centre of the city where the rally was to be held.
The authorities said demonstrators had not been given permission to hold gather in the square.
City buses were used to transport those arrested and scuffles broke out as police removed flags and wrestled with protesters.
A police helicopter hovered over Gorky Square and adjacent roads were blocked by lines of riot police, Reuters reported witnesses as saying.
Protest leaders are resisting what they see as the Kremlin’s tightening grip on power and demand a fair presidential election next year.
The constitution requires Putin to step down in 2008 and most observers expect him to back a Kremlin insider to succeed him.
But the anti-Kremlin opposition is in a minority in Russia, where Putin appears to enjoy the support of most Russian voters.
Nizhny Novgorod, about 400 km east of Moscow, was chosen by opposition leaders keen to spread their message to large urban centres beyond Moscow and St Petersburg.
More marches are planned in Russia’s two main cities in mid-April.
Source : News Agencies 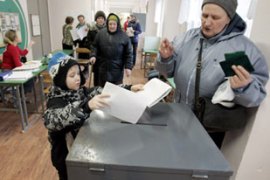 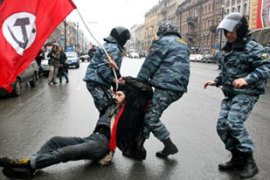 Thousands gather in Saint Petersburg for Anti-Putin ‘march of the disagreeing’.