The attack took place as General Sonthi Boonyaratglin, Thailand‘s first Muslim army commander and leader of a September coup which ousted Thaksin Shinawatra, the prime minister, flew to the region where more than 2,000 people have been killed.

Sonthi told reporters after a security meeting in Pattani that he would send more troops and police if needed to a region where 20,000 soldiers are battling fighters who never claim responsibility for attacks or publicise their demands.

His visit followed an attack by armed men on an Islamic boarding school in nearby Songkhla province on Saturday in which three Muslim boys were killed and eight people wounded.

Police blamed separatists for the attack, but villagers accused Thai army Rangers, saying they did not believe Muslims could have been responsible.

On Monday, 200 Buddhist villagers demonstrated in front of the Saba Yoi District office demanding the government get tough on militants. Three hundred Muslim protesters stopped police and soldiers from entering the village to inspect the school.

A military crackdown would be popular with the majority, even though the government installed by the military says it is pursuing a policy of reconciliation to restore peace. 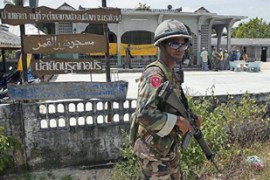 Areas of Thailand under curfew

The country’s military is imposing the curfew for the second time since 2004. 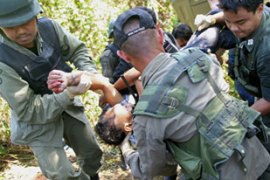 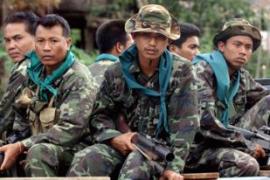