“There was no progress at all today,” he said. “China as chairman urged North Korea to come to the table but they would not come.”
On Monday Christopher Hill, the chief US envoy to the nuclear talks, said Washington had aggreed to allow the transfer of North Korean funds from the Macau-based Banco Delta Asia to an account in Beijing.
The announcement had raised hopes that a major sticking-point in negotiations had been removed.
Timetable
The funds had been frozen by the US on suspicion that they were connected to alleged North Korean money-laundering activities.

But on Tuesday the North Korean delegation said it would not take part in any further discussions on its nuclear programme until it had confirmed that the funds had been credited to the Beijing account.

The meeting in Beijing, bringing together envoys from the US, Russia, China, Japan and the two Koreas, had been designed to fine-tune a timetable for North Korea’s nuclear disarmament.
In February the six nations agreed a deal giving North Korea 60 days to shut down its main reactor and plutonium processing plant in return for aid and normalising relations.
Abductions
Earlier on Tuesday North Korea accused Japan of trying to sabotage the nuclear talks process as part of a continuing row over North Korean abductions of Japanese citizens.
In a statement on Tuesday, North Korean state media blamed Japan for the recent breakdown of bilateral talks in Vietnam on normalising relations.
At the meeting, Japan had said no progress would be made until North Korea accounts for several citizens Japan says were kidnapped by North Korean agents in the 1970s and 80s.
In its statement North Korea said Japan should drop the abduction issue and instead apologize and compensate North Korea for its 1910-45 colonial rule over Korea.
Source: News Agencies 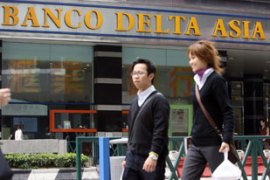 Frozen $25m to be moved from Macau to China account for humanitarian use. 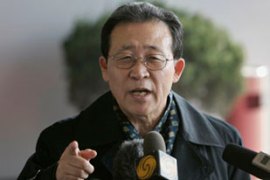 Pyongyang says it will not end its nuclear programme unless bank funds are released.

Pyongyang tells the IAEA that sanctions must be lifted before progress can be made.