Shabina Begum’s case was likened to a row in France triggered by a ban on Muslim headscarves in state schools.
Political issue
Jack Straw, a senior British politician, said last October that the niqab, a face covering that leaves only the eyes visible, makes community relations “more difficult”.
Tony Blair, the British prime minister, then described the niqab as a “mark of separation”.
Some Muslim groups accuse the government of creating an atmosphere of Islamophobia.
The DfES said its guidance will recommend teachers take into account the religious requirements of some pupils to wear items such as a turban.
“They should have regard to a range of religions and try to accommodate them where possible,” the spokesman said.
“But what we are saying in the guidance is that safety, security and the ability to learn is paramount.”
Uniform policy
Referring to the the niqab, he said: “Some teachers say it is difficult to read a child’s expression or understand what is being said.”
The education department’s document says schools should consult parents, governors and the local community on uniform policy before making any decisions.
Copies of the paper will be sent to schools and published on the DfES website.
It will then be discussed and a final version published in coming months, the spokesman said.
Source: News Agencies 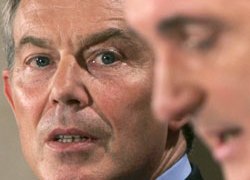 Blair: Veil a mark of separation

Tony Blair, the British prime minister, has entered the debate over the integration of Muslims into British society, calling the full veil worn by some Muslim women “a mark of separation”.

A British minister responsible for race and faith in the UK has called for the sacking of a Muslim teaching assistant who has been suspended for refusing to take off her veil in class.