The sacked politicians said they aimed to take their seats in the building, which was blocked by hundreds of police wielding batons to prevent a repeat of last week’s clashes when opposition members tried to force their way inside.

Congress President Jorge Cevallos however, swore in 21 substitutes and allowed the legislature to hold a session without the fired politicians.

Cevallos originally objected to the presence of the substitutes shortly before he swore them in.

He made the comments during a debate to decide whether the 100-strong congress could hold a formal session without a quorum (congressional majority).

But the issue was resolved by a swearing-in that increased to 55 the number of deputies present.

Correa said he hoped Congress would “start working in line with the people’s demands,” a government spokeswoman said.

On March 13, several of the ousted politicians defied police and made their way into congress after shoving matches with officers and Correa supporters.

That session was called off for want of a quorum.

On Tuesday, almost 200 Correa supporters yelled abuse at a smaller group of demonstrators opposed to next month’s referendum over whether to elect a national assembly that would rewrite the constitution.

Correa, who was sworn in to a five-year term on January 15, has said he planned to reverse free-market measures, renegotiate foreign oil contracts and cease doing business with the International Monetary Fund.

Opinion polls show 70 per cent of Ecuadoreans support his proposal for a Constituent Assembly, but critics claim it is unconstitutional and inspired by Hugo Chavez, the president of Venezuela, where a national assembly rewrote the constitution in 1999.

Correa has expressed support for the sackings of opposition politicians and insisted the crisis it triggered would not threaten his job.

With his strongest opponents now out of congress, Correa hopes to push ahead with his political proposals and economic reforms, experts said.

Simon Pachano, an analyst with Ecuador‘s branch of the Latin American Faculty of Social Sciences, said: “This is an evident victory for Correa … the opposition has lost a lot of power.”

“[But] the government has probably also struck a deal with the substitutes.” 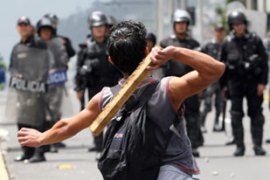 Clashes erupt amid escalating feud between president and Ecuadorean Congress. 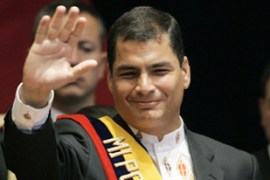 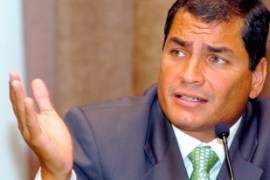 Ecuador to vote on constitution

Congress agrees to a referendum on president’s plan to re-write constitution.