Palestinian officials urged the international community to give their new government a chance.

But Ehud Olmert, the Israeli prime minister, equated the new government’s affirmation of the Palestinians’ right to resistance to “terror” and criticised it for not explicitly recognising Israel’s right to exist.
“We can’t have contact with members of a government that justifies resistance, or in other words, terror,” he was quoted as saying by participants of the cabinet meeting.
The new Palestinian government’s platform refers to resistance “in all forms” to Israeli occupation, but also calls for consolidating and expanding a truce with Israel.
US position
In Washington, Stephen Hadley, the national security adviser, said comments on the Palestinian right to resist Israeli occupation by Hamas were “a little troubling”.
But in a break from the Israelis, Micaela Schweitzer-Bluhm, spokeswoman for the US consulate in Jerusalem, said the US were likely to maintain contact with non-Hamas members of the new government, despite keeping a ban on financial aid to the Palestinians.
Olmert said he would maintain contact with Mahmoud Abbas, the Palestinian president, but he said any talks would be limited to humanitarian issues, not peacemaking.

Israel pledged to maintain its sanctions, freezing $60m a month it collects in taxes on behalf of the Palestinians.

The transfers had been a major source of funding for the Palestinian government’s operating budget. Palestinian officials decried the Israeli decision.
Azzam al-Ahmed, the new deputy prime minister and Fatah member, said: “This statement continues the long-standing Israeli policy that says there is no Palestinian partner for peace.
“Israel doesn’t want to revive the peace process,” the Fatah member said. Israel urged the Quartet of Middle East negotiators – the UN, US, EU and Russia – to maintain its financial sanctions, imposed more than a year ago after Hamas won elections.
Out of sync
But Israel’s position appeared to be out of sync with Western countries. Norway, a major donor to the Palestinians, said it would recognise the new government and resume aid.
Britain and the United Nations signalled flexibility while Russia and France indicated a willingness to work with the Fatah-Hamas coalition. Arab countries including Qatar, Syria, Jordan and Yemen have called for the aid boycott to end.
The Palestinian government’s new position towards Israel still falls short of conditions placed by the Quartet, but does signal a softening in Hamas’s position.
Ismail Haniya, the Palestinian prime minister, appeared to implicitly recognise Israel on Saturday.
The government has also authorised Abbas to conduct peace talks with the Jewish state and pledged to submit any future deal to a national referendum, apparently taking away veto power from Hamas.
Source: News Agencies 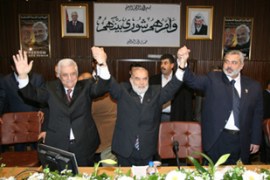 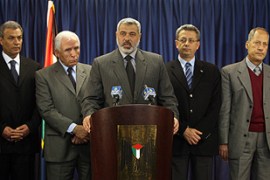 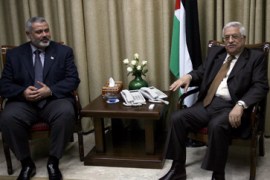