Unions warned of tougher action, including the halting of production lines, if Airbus and its parent EADS did not back down on their “Power8” restructuring plan to save 5.0 billion euros ($6.6 billion) by 2010.
Saving cash
The job cuts come as part of the firms response to delays to the A380 superjumbo project.
Airbus says it must urgently save cash to compensate for a weak dollar, which benefits arch-rival Boeing, and boost market hopes for its next model, the mid-sized A350.

On Thursday, Qatar Airways said it planned to buy 80 A350 jets for $17.2bn at catalogue prices, one of the biggest orders in the history of Airbus.

Police in the northern German city of Hamburg, where Airbus has one of two assembly lines, said the protest drew 8-10,000 people.
In Toulouse, where the other Airbus assembly line includes final construction of the A380, an estimated 7,000 people stopped work at Airbus and its suppliers.
In Paris, about 100 people read tracts and played loud music in front of the EADS offices.
Tough measures
Airbus has ruled out forced lay-offs for now but left the door open to tougher measures should the company’s fortunes not improve within 12 to 18 months.
A lengthy strike in any of the four Airbus countries – France, Germany, Britain and Spain – would quickly cripple aircraft assembly, which is timed to the minute.
On average one narrow-body aircraft rolls off the line every 9.3 working hours.
In Spain and Britain, which have a smaller share of Airbus construction work, protests were relatively muted, although 500 workers reportedly went on strike in Toledo, central Spain.
Source : News Agencies 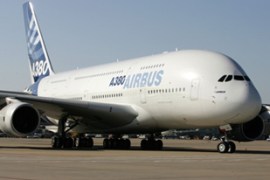 Qatar Airways and Aeroflot come in with record deal for the A350 aircraft. 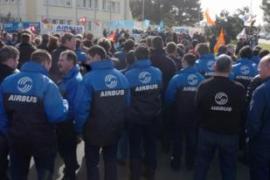 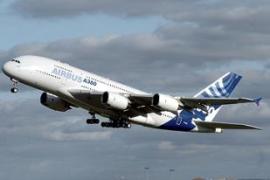 Ailing aircraft maker loses last customer for the cargo version of A380 superjumbo.