Illegal immigration from Mexico into the US is the thorniest problem between the two neighbours, with drug trafficking a not-so-distant second.

These issues stand to dominate the agenda when Bush meets Calderon, a fellow conservative elected last year, bucking a trend towards the left in Latin America.

“The system needs to be fixed,” Bush said.

“We don’t want people to feel like they have to get stuffed into the back of a truck and pay exorbitant fees to ‘coyotes’ to come and try to realise dreams,” Bush said, referring to traffickers who transport undocumented workers across the US-Mexican border.

Mexicans account for more than half of the 12 million illegal immigrants in the US.

Slim, whose wealth from his telecommunications, retail and industrial firms is estimated at $49bn by Forbes magazine, said US companies should build large, high-quality hospitals on the Mexican end of the 3,200km border.

“This would reduce health costs in the United States,” Slim said.

Cheaper Mexican salaries – from construction workers to nurses – would lower hospital costs and fees, he said, emphasising that the increase in US investments would stem the flow of immigrants moving into the US.

“What is needed is legal immigration, immigration accords, but not one just for highly qualified people,” Slim said.

Bush said on Monday in Guatemala that he wants a breakthrough on US immigration reform by August.

Bush failed to get an immigration overhaul through the then Republican-led congress last year due to conservative concerns over a porous US-Mexico border.

Slim said Calderon had set out on the right foot with a major clampdown on drug trafficking and other violent crime in Mexico.

Calderon has sent thousands of troops to states where drug gangs operate.

“I see it as very positive the vision that he has and the steps he is taking, especially on the crime front,” Slim said.

Slim said Mexico, one of the biggest suppliers of crude oil to the US, should invest more in energy exploration and production to convert itself into a more reliable provider of oil to its neighbour.

Bush faced demonstrations, sometimes violent, in his earlier stops in Brazil, Uruguay, Colombia and Guatemala, where he has sought to advance US interests against the rise of left-leaning governments in the region and to counter the influence of Chavez who has been on rival tours with Bush.

Chavez has repeated accusations that the US is trying to assassinate him and close ally Evo Morales, Bolivia’s president.

The Venezuelan president says he he wants to revive a global socialist opposition to the US. 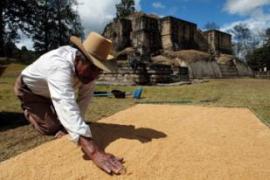 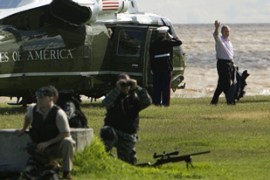 Protests against Bush in Bogota

US president arrives in Colombia but may not stay overnight amid security concerns.

US president arrives in Colombia but may not stay overnight amid security concerns. 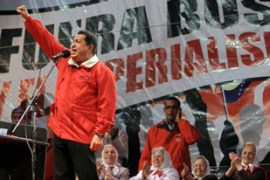 Thousands rally in Argentina to denounce US president as Bush tours Latin America.