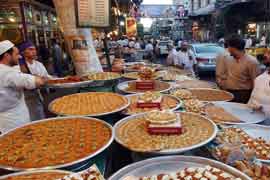 The number of Iraqis leaving their home country and seeking refuge in neighbouring states has intensified in the past two years.

The refugees say they had to leave to avoid being killed by militias, which have been targeting Iraqis regardless of faith, sect, or ethnicity.

But Iraq’s neighbours have recently started to apply stricter visa regulations to Iraqis applying for asylum from Iraq.

Jordan, which used to grant Iraqis a renewable three-month visa on arrival, has reduced it to one month. Syria is also about to start a limited-period visa instead of an open one.

Jordan and Syria say the number of Iraqis in their countries is more than they can cope with, and that they lack the proper infrastructure to handle them.

Some Iraqis in Jordan and Syria say that if they had access to other countries, they would not stay where they are. But getting there in the first place is not easy either.

Anas, an Iraqi computer engineer who declined to give his full name, said he had to seek the help of a trafficker to get out of Jordan.

“No country granted me a visa. All doors were closed. Jordanians would not allow me to work, and I cannot return to Iraq, it would be as going to death. We received threats there, because my brother was an officer in the Republican Army under Saddam.

“I had to pay a fortune to the smuggler to get me to a European country where I asked for asylum. The journey was painful and sometimes degrading. He gave me a passport of somebody who looks like me, and I flew from Jordan to the Gulf, then to a South Asian country, and again to two Gulf countries before I took the plane to Europe.“

Abu Munaf, a Shia Iraqi officer and former bodyguard of a high-ranking Iraqi officer, who has lived in Syria since 2004, says he hopes that Syria will not apply strict residency measures.

He said: “It would be a disaster. I was imprisoned and tortured in Iraq in 2003. Things back then were bad, but not as today. I assure you, if I return to Iraq, I would be taken the minute I set foot at the Iraqi borders.”

He also complained about visa measures applied by Arab countries.

“I wish I could go to an Arab country and get a proper residency visa and live peacefully, but it is nearly impossible. I have tried many times, but to no avail,” he said.

Khalid al-Maeini, an Iraqi engineer and a PhD-holder in political science, left Iraq after receiving threats. He says that it feels as if a decision has been made to “besiege” Iraqis.

“It is very strange how embassies treat us. The second they see the word Iraqi on the application, they get paranoid and reject the application. I feel as if there is an unannounced decision to besiege Iraqis abroad to force them to go back to Iraq.”

Many Iraqis do not want to permanently re-settle abroad, but merely fled Iraq to wait for better days.

“I and many of my colleagues left Iraq not because we are afraid for our lives, but because we know death squads want to get rid of us, and we must stop them from doing so. The only way is to be out of Iraq and return to build the country whenever the atmosphere is safer to do so.

“We tried Lebanon, Egypt, and Arab Gulf states; none of them seemed really interested in hosting us given the fact that we are just seeking jobs that would keep our heads above water until we are able to return to our country. We do not intend to immigrate, we have a life back there in our country,” al-Maeini said.

Eva Abu Halawa, a Jordanian human rights activist, said the Jordanians have not closed the door, but they have become selective.

“I think the Jordanian authorities have started to apply measures to Iraqis willing to stay in the country in order to make sure that those Iraqis will not be a burden. We are still seeing some permanent residency applications being accepted and some visit visas are being renewed.

“That means there are some quality control measures, if we can use this term, being applied but the government would not say what those measures are,” she said.

Fadil al-Rubei, a Damascus-based Iraqi politician, said the latest measures applied in Syria will not affect Iraqis’ position in Syria.

“Syrian officials have assured me that nothing is going to change,” he said. “They just want to have a better control on Iraqis’ information.”

The Syrian and Jordanian governments have not provided accurate estimates of the number of Iraqis living in their countries, but unofficial estimates put the number at about 1.5 million.

Antonio Guterres, UNHCR’s high commissioner, landed in Jordan on Tuesday and is expected to travel to Syria on Thursday and Friday to discuss the issue of Iraqi refugees in those two countries.