He said the immigrants include “200 Asians from Kashmir” as well as Africans and Ivorians. He did not say whether the Kashmiris were Indian or Pakistani, although earlier reports had said the migrants were mainly Pakistani.

On Monday, the Mauritanian Red Crescent and the Spanish Red Cross said they had sent urgently needed aid to the immigrants stranded off the coast of Mauritania, a CRM co-ordinator said on Monday.
Haye said the joint aid package consisted of more than a ton of food, including bread, biscuits, sandwiches, cheese and water.
But despite the aid, the Mauritanian authorities again refused on Monday evening to allow the immigrants to disembark in Nouadhibou.
Towed by Spanish vessel
Carlos De Francisco, Spain’s deputy military attache at its embassy in Mauritania, said the boat’s motor had broken down in international waters and that the boat had been towed by a Spanish vessel.
“According to the agreements that Spain has signed with Senegal and Mauritania, all boats in danger must be towed to the nearest port,” he said.
Earlier on Monday a spokesman for the Spanish ministry of foreign affairs in Madrid was reported to have said that Spain and Mauritania had agreed in principle to allow the boat to disembark in Nouadhibou.
About 30,000 illegal migrants arrived in Spain’s Canary Islands during 2006.
The Spanish authorities say they believe that one in six migrants dies during the journey and Madrid has stepped up its aid and diplomatic ties with West Africa to try to deal with the problem.
Source : News Agencies 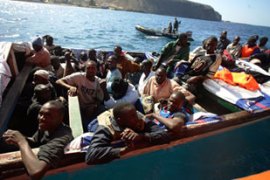