Despite seeking extra funding for the military in Iraq and Afghanistan, Bush said he would balance the overall budget within five years, partly through cuts on health care and other non military spending including environmental protection.

He is seeking $78bn in savings through cuts in the government’s big health care programmes, Medicare for the elderly and Medicaid for the poor, over the next five years.

The budget called for a four per cent cut in the Environmental Protection Agency’s budget to $7.2bn while education outlays were held at $56bn.

“Our priority is to protect the American people. And our priority is to make sure our troops have what it takes to do their jobs. We also have got priorities in national parks, in education, in health care,” Bush told reporters at a meeting of his Cabinet.

“But we have proven – and I strongly believe Congress needs to listen to a budget which says no tax increase and a budget, because of fiscal discipline, that can be balanced in five years.”

The Iraq war has already surpassed the cost of the Vietnam war in inflation-adjusted dollars with only World War II more costly.

The budget includes a $141.7bn request in emergency appropriations to fund the government’s war on terror in the 2008 fiscal year starting October 1.

It also includes a $93.4bn request in supplemental appropriations for 2007 to support ongoing military missions overseas.

The budget request means the US would spend 11 per cent more on the military next year and aside from ensuring the US military gets enough new tanks, helicopters and munitions, the proposal also seeks to fund a planned increase in the size of the armed forces.

The spending plans project that the US will have spent $661.9bn in its global war on terror since the 2001 attacks on New York and Washington.

Senior Democrats were quick to voice their criticism of the budget proposal.

Pelosi said: “Today’s budget from the president is just more of the same fiscal irresponsibility and misplaced priorities; it takes our country in the wrong direction.”

Harry Reid, the Democrat’s majority leader in the Senate, promised to give Bush’s 2008 budget a “tough” review.

Another Senator, Kent Conrad, said: “The president’s proposal, if approved, would take us right over the cliff into a chasm of debt.” 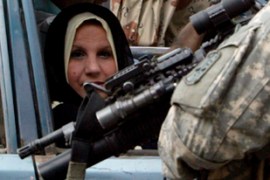 The US president suggests cuts in health care to seek more funds for war in Iraq.