He added that “minor force” had been used to break into the flat of Karadzic’s daughter, but there was no resistance from her once they had entered.

“We had very productive interviews with both parties,” Chappell said, but refused to go into details. “We also took five boxes of items.”

Sonja Karadzic answered a phone call from the Associated Press news agency as troops were entering the building where she lives with her husband and two children.

“Someone is breaking in. We and the neighbours asked who they are and they said ‘police’,” she said before hanging up.

The overnight raid in Pale, a small town about 15km east of Sarajevo, was the latest in a series of raids on the homes of the Karadzic family members and alleged supporters.

A senior diplomat told a Bosnian newspaper on February 14 that Karadzic is still in contact with his family and helps them financially.

Raffi Gregorian, the deputy to the international community’s envoy in Bosnia, told the Dnevi Avaz newspaper: “We know that Karadzic financially supports his family … I can say that they were receiving money last year.
“They are in touch with him, they receive money from him, help him, maybe even meet with him.”

Gregorian, who has called for the property of Karadzic’s family members to be confiscated, added that they were “at the centre of his support network.”

Karadzic and Ratko Mladic, his former military chief, are the most senior of six Serb war crimes suspects still wanted by the UN court based in the Hague.

The former Bosnian Serb leader has been accused of genocide over the July 1995 massacre of about 8,000 Muslim men in Srebrenica, the single worst atrocity in Europe since the second world war.

The authorities have little knowledge of Karadzic’s whereabouts, but he is thought to be hiding in Serb-controlled parts Bosnia, or in a remote part of neighbouring Montenegro, where he spent his childhood. 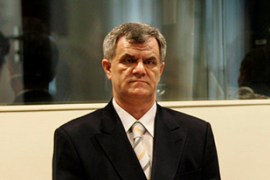