By
“They have admitted getting training in Wana, and we have also recovered a list of potential targets from them,” Khan said.
He said the men belonged to a faction known as the Qari Zafar group, which had links with al-Qaeda and the Taliban had been involved in previous suicide attacks in Pakistan.

“They had plans to carry out attacks in Karachi and Jehlum,” said Khan.

He described Qari Zafar as a splinter group of Lashkar-e-Jhangvi, a militant organisation that has targeted Pakistan‘s Shia minority, and has forged ties with al-Qaeda.

The police official also said the Qari Zafar group had been behind the bomb attack on the US consulate that killed 12 people in June, 2002.

Militants opposed to President Pervez Musharraf’s support for the US “war on terrorism”, have sought to destabilise the government by carrying out attacks.

There has been a series of blasts, including a number of suicide attacks since the start of 2007.

An attack in the capital, Islamabad, and another in the northwestern city of Peshawar raised fears that unrest in the tribal regions was spilling over into Pakistan‘s cities as a result of the government confronting Taliban fighters.

Meanwhile, al-Qaeda is believed to have posted a video showing what its says is an attack on a military position of US and Afghan forces in southern Afghanistan.

The video appears to be an attempt by the network to disparage US claims to be winning the war against the Taliban and allied militia in Afghanistan.

It begins with Ayman al-Zawahiri, the deputy leader of al-Qaeda, ridiculing George Bush, the US president, and saying that his claim to have deprived al-Qaeda of a safe haven in Afghanistan is a “bare-faced lie,” according to a transcript by IntelCenter, a US group that tracks extremist messages.

With a narrator speaking in American-accented English, the tape then shows film of what it claims is an attack on a military position in Arghandab, a district north of the southern Afghan city of Kandahar.

The authenticity of the scenes could not be verified. The video carried the logo of as-Sahab, the al-Qaeda media production company, and it was posted on an website known for hosting extremist material.

Al-Qaeda appeared to have issued the tape on Thursday with the title Holocaust of the Americans in the land of Khorasan, the Islamic emirate: Capture of an American post, Arghandab. The name Khorasan refers to Afghanistan.

The video shows the men firing at the alleged post; but their weapons cannot be discerned because it is night. Tracer bullets cross the sky and one sees the explosions of what are said to be rocket-propelled grenades.

“After a fierce battle, the mujahidin begin their retreat from the zone of operations,” the narrator says in English. The tape quotes a fighter as saying: “We retreated after about 45 minutes of fighting.”

It is not clear whether the fighters overran the military position. Such an attack on a position held by US and Afghan forces in Arghandab could not be immediately confirmed. 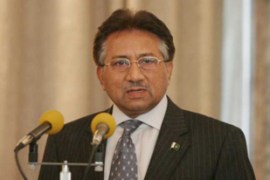 Army claims to have killed up to 10 suspected fighters in country’s tribal north.