More than 2,000 miners at Chambeshi have complained that the Chinese management have paid low wages and failed to adhere to safety measures.

There has been wider anti-Chinese sentiment across Zambia ahead of Hu’s visit, with many accusing Chinese firms of exploiting local labourers, work standards and the country’s mineral wealth.

On Thursday, the Zambian government said that Hu’s trip to the Copperbelt and Southern provinces in Zambia had been cancelled, but did not give any reasons.

He was scheduled to commission a $200m copper smelter at the Chambeshi mine.

He was also due to go to Ndola, a town in Zambia‘s Copperbelt province where he was expected to lay the foundation stone of a Chinese-funded stadium.

Hu’s tour of eight nations in Africa is part of a drive to deepen Chinese ties on the continent.

He arrives in Zambia from Sudan and will leave Lusaka for Namibia.

Earlier on Friday, he met Ellen Johnson-Sirleaf, Liberia’s president, on the second leg of the tour.

Thousands of people waving flags lined the road from the airport into the capital where Hu and Sirleaf held talks and signed a series of accords. The Chinese president also announced he was cancelling the West African country’s $15m debt.

“Our country is rich in natural resources and we want to put our population and our young people to work,” she said. 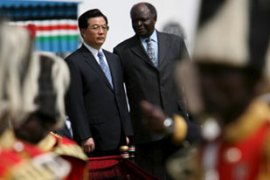 Visit aimed at sealing trade deals and increasing China’s influence in the region. 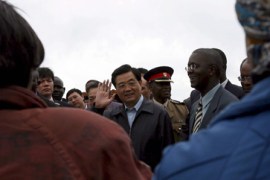 Your questions answered on the Chinese leader’s visit to Africa. 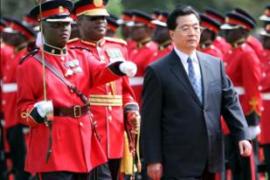