Rula Amin, Al Jazeera’s correspondent in Beirut, reported Hezbollah officials she spoke to said Peres’ admission was an attempt by Israel to clear its name and that it would not be of any comfort to the relatives of those who had lost their lives to cluster bombs.

During the 34-day war in Lebanon last summer, the UN estimates that around one million cluster bomblets were dropped by Israel in the south of the country, 90 per cent of them in the last 72 hours before a ceasefire took effect.

A UN official told Al Jazeera in Beirut that despite an intensive de-mining effort, only 19,000 cluster bombs have been cleared so far.

The onset of winter in Lebanon and damper conditions have led to the bombs becoming further embedded in the ground, rendering them similar to landmines.

Peres’ admission may put pressure on the US congress to further investigate the matter after the state department said it is “likely” that Israel violated an agreement with Washington in its use of US-made cluster bombs in civilian areas of Lebanon.

“There were likely violations,” Sean McCormack, a state department spokesman, said on Monday, adding a preliminary report had been sent to congress.

Peres said that the biggest mistake was the war itself and blamed Hezbollah for provoking it.

Peres said during a visit to Doha, the capital of Qatar: “I think Hezbollah provoked an unnecessary war, they suffered, they made Lebanon suffer, they made Israel suffer, they didn’t achieve anything.

“Today Lebanon is more divided than ever, they are a foreign body within Lebanese politics, an army within an army, a state within a state, representing Iranian interests more than Lebanese unity. Who needs them, what for?”

Elsewhere during a wide-ranging interview, Peres said the Jewish state was ready to work with a Palestinian unity government if Fatah and Hamas were able to reach a deal.

He said: “I think today the problem is rather the spirit among the Palestinians and the conflict between them and us and once they will unite and establish a government, and even before, we are ready to negotiate with Abbas right away.”

Peres said Israel had no intention of attacking Iranian nuclear installations as the Islamic republic pursues a nuclear programme, but launched a personal attack on, Mahmoud Ahmadinejad, the Iranian president.

“He so crazy, he is so extreme, he so exaggerates, that it brings many parties together and if he will continue, it will continue.”

Seyed Mohammed Marandi, the head of North American studies at Tehran University, told Al Jazeera that Ahmadinejad was a democratically-elected leader and that Israel was the source of problems in the region.

He said: “It is really the Israelis that have to answer for the crimes that they have committed against the Palestinian people, as well as the people of Lebanon.

“They [Israel] say that the use of cluster bombs is [a] mistake … it was a crime, not a mistake, so I think the problem lies with Israelis not the Iranians.”

Peres also laid out his credentials to succeed Moshe Katsav as the next Israeli president.

He said: “I am not in a beauty contest and I do not hide my views.

“A lion majority of Israelis think what I am saying makes sense and know exactly that I represent something that is deep and profound.” 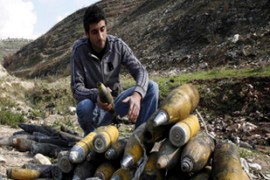 The Red Cross has called for an immediate ban on the type of cluster bombs used by the Israeli military in Lebanon.

Nearly all the victims of cluster bombs are civilians, a third of them children, according to a report by the campaign group Handicap International.