The Amazon may be larger, the Nile longer, but no river flows through the lives of as many people as the Yangtze, known in China as the Chang Jiang.

Despite the spectacular views, for many it brings back memories of bitterness and pain.

Zhang Zheng Jun now lives with his wife in one room overlooking the river, his only belongings spilling out of a suitcase.

In March he was forcibly relocated – his home demolished to make way for a bridge over the new reservoir created by China’s Three Gorges Dam.

When he refused to accept the government’s compensation offer he was arrested and his house torn down.

Up to four million people may lose their homes before the project is completed in 2009.

More than 1.5 million people have already been forcibly resettled, but many complain they have yet to see any compensation.

Allegations of corruption are also widespread, with reports emerging that tens of millions of dollars of resettlement money are being pocketed by corrupt officials.

From a rooftop Zhang points out to me where he used to live.

Other villagers say the same – that they cannot rebuild their lives on the money the government is offering.

Zhang Zheng Jun said it was not enough for houses in the area.

“Thirty-five dollars per square metre is far from enough to build a new house.”

The Three Gorges dam is the cause of their pain.

The length of the Golden Gate bridge, and twice as high, it holds back a reservoir of nine million cubic miles of water.

The Yangtze has risen by 150m, swallowing whole cities and towns.

But while the first wave of migration is almost complete, the government recently revealed that unexpected complications could mean as many as four million more people will have to be moved.

For those who predicted massive environmental and social upheaval, there is little satisfaction in seeing that come true.

Dai Qing, an environmental campaigner, says: “We feel very sad. We warned them before and we didn’t want this to happen but they didn’t listen to us.

“It was the ordinary people who suffered the most.”

Villages have been built above the Yangtze to house those who had once lived on the riverbanks below.

Old and poor, they left behind their ancestral homes.

But cracks have started to appear in their new houses and the river has risen further, a process which will eventually force them to move again.

“Living here, every extra day is a bonus,” says Wang Da Ying, a farmer in one of the villages.

“I spent all my savings on this house. We’ll have to move again, but I just can’t afford it.”

Perched precariously on the steep hillside, many villagers fear the day when their lives are once again swallowed up by the rising waters of the Yangtze river. 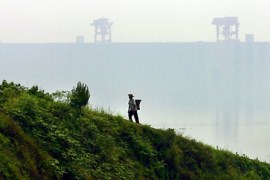 The heavy price of China’s mega-dam