Fiji disaster management officials lost all contact with Cikobia as the cyclone hit the island with winds at its centre gusting to 250kph.

“Some 65 people evacuated to caves (on Cikobia) and houses were flattened this morning, but we have no reports of any deaths or injuries,” Donu said.

Cikobia, a small northern island, has a population of about 100 people.

A government patrol boat with emergency supplies was to travel to the island on Saturday afternoon, and an aircraft was being sent to carry out an aerial survey, he said.

People in the Lomaiviti and Lau island groups and on Vanua Levu, Fiji‘s second main island, escaped serious damage and there have been no reports of injury so far, he noted.

“It’s very much a huge relief, especially since there’s no major damage to most of the country’s northern region,” Puimanu said.

“At that point it will be a Category 3 storm,” she said. 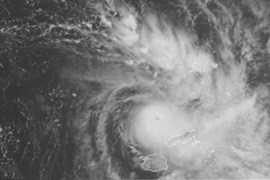