“It opens a window of opportunity for Iran now because Iran obviously has been somewhat vindicated in saying they have not been working on a weapons programme at least for the last few years,” he said.

He said that the Iranian authorities should now seize the opportunity to prove that they have peaceful plans for nuclear energy.

Ahmadinejad seemed to agree that the report had gone some way to backing up Iran’s insistence that its nuclear programme is being developed for peaceful civilian applications.

“You saw the report of the US intelligence. They said clearly that the Iranian people were on the just path,” he told a televised rally in the western city of Ilam.

“This report tries to extract America from its impasse but it also is a declaration of victory for the Iranian people against the great powers”.

However, the report did say that Iran was continuing to develop the technical means that could be applied to producing weapons.

George Bush, the US president, responded to the assessment on Tuesday by saying that Iran remained a danger if it mastered the knowledge to make a nuclear weapon.

“Iran was dangerous, Iran is dangerous and Iran will be dangerous if they have the knowledge necessary to make a nuclear weapon,” he said.

But buoyed by the US report, Ahmadinejad vowed not to roll back Iran’s nuclear programme.

Alireza Ronaghi, Al Jazeera’s correspondent in Tehran, said the Iranians held the belief that they were right from the beginning.

“Many have said that Bush and the United States are the main losers following the publication of the report,” he said.

Before the report was made public, the five permanent UN Security Council members – the US, Russia, China, Britain and France – as well as Germany, were discussing a third round of sanctions over Iran’s refusal to halt uranium enrichment.

“I think council members will have to consider that, because … now things have changed,” he said.

Sergei Lavrov, Russia’s foreign minister, said that Moscow was still urging Iran to halt enrichment, but he also suggested that the report would  weigh against the sanctions resolution being pushed for by the US.

“We will judge the situation around the idea of a new UN Security Council resolution on the basis of all factors, including, of course, on the basis of public confirmation of the US information,” RIA Novosti news agency quoted him as saying.

“The way to stop Iran is by more effective sanctions,” Tzipi Livni, Israel’s foreign minister, said during a news conference in Slovenia.

“Iran with a nuclear weapon is something that the world cannot afford. It is clearly a threat to the region … While we are talking, here at this press conference, Iran continues with its enrichment activities,” she said. 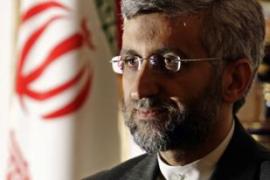 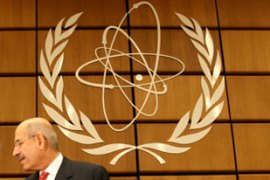