“And therefore we do need to see the United States as a full ratification state when it comes to Kyoto.”

Rudd, who plans to visit Washington by mid-2008 for talks with George Bush, dodged the question when asked if he would urge the US president directly to ratify the Kyoto pact.

The Kyoto Protocol, adopted in 1997, requires industrialised nations to cut greenhouse gas emissions from 1990 levels by an average of 5.2 per cent by 2012.
Climate conference
After reversing a decade of resistance by his predecessor, Rudd received a standing ovation at the UN conference on climate change in Bali when he ratified the Kyoto agreement on Monday in his first act after being sworn in as prime minister.

Yvo de Boer, the executive secretary for the UN Framework Convention on Climate Change (UNFCCC), said the applause was emotional and spontaneous.

“The long applause in fact reflects people’s appreciation for the courage shown by Australia to take this dramatically different position, to engage even more strongly with the international community on the question of climate change.”
Rachmat Witoelar, the UNFCCC president, said Australia would be given a seat at the negotiating table and invited to fully participate in the talks for a new climate change regime.
Rudd is preparing to attend the Bali talks next week along with Penny Wong, his climate change minister, and Peter Garrett, the environment minister.
The conference in Bali, which opened on Monday and runs to December 14, is bringing together representatives from about 190 countries aiming to expedite formal negotiations for a successor agreement to Kyoto that will expire in 2012.
On Wednesday, Japan proposed that the conference pursue a broad, “least common denominator” approach with no legally-binding targets, drawing flak from environmentalists.
To charges that Tokyo was just trying to please the US, Hombu Kazuhiko, a Japanese delegation spokesman, told The Associated Press: “Yes, of course. We don’t want the US out of the final decision-making.
“Our top priority is to start negotiations. Once that begins we can add some more elements.”
Source: News Agencies 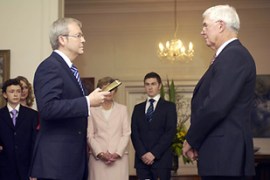 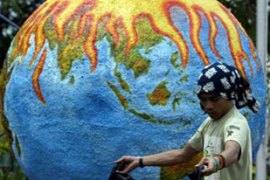 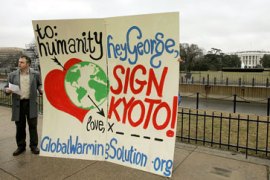