The new housing is to expand the Har Homa settlement, built on land Israel seized near Jerusalem 40 years ago.

Construction of new Jewish settlements on occupied Palestinian territories was supposed to stop immediately as part of Israel’s commitment to restarting peace efforts after the Annapolis conference.

Ahmed Qurei, the chief Palestinian negotiator, on Tuesday called it an “attempt to obstruct negotiations” after Israel’s housing ministry said the government had invited construction firms to bid for contracts to build the dozens of houses and shops.

A spokesman for Ehud Olmert, the Israeli prime minster, insists the plan to build does not breach an undertaking at Annapolis to honour commitments under the 2003 “road map” to peace.

These include halting Jewish settlement on Arab land. But Israel does not view the site it calls Har Homa – and Palestinians call Abu Ghneim – as part of the West Bank territory Palestinians want for a state.

Saeb Erekat, a fellow Palestinian negotiator, said the administration of Mahmoud Abbas, the president, wrote to Condoleezza Rice, the US secretary of state, and other capitals, noting that both sides agreed at Annapolis to US adjudication in disputes over the road map.

“This is a real test for all of us,” he said. “We urge you to have the Israeli government revoke this order because it will be a severe blow to all those who took part in Annapolis.”

A tender posted on the Israel Land Authority’s website and dated December 2, invited firms to bid to build 307 “residential and/or commercial and/or hotels and/or leisure” units.

An Israeli housing ministry spokeswoman said it was part of a 20-year-old plan.

That annexation is not recognised internationally, but Israel has housed thousands of Jews in such developments, lying between East Jerusalem and Palestinian towns in the West Bank.

Abbas said at Annapolis he wanted East Jerusalem as capital of a state he hopes can be established by a treaty before Bush steps down.

Asked whether the new housing plan was a rebuff to Abbas’s plans, Olmert’s spokesman, Mark Regev, said: “Not at all.

“Israel makes a clear distinction between the West Bank and East Jerusalem, which falls under Israeli sovereignty.”

But Nimer Hammad, an aide to Abbas, said: “It will undermine the credibility of the United States as a sponsor of the peace process and the effort of the Annapolis conference.”

Bush hailed the success of the Annapolis meeting in seeing Abbas and Olmert agree to launch full peace negotiations after a seven-year stalemate. But few observers believe a deal can be clinched by the end-2008 target date embraced at the meeting.

Negotiators plan to meet in Jerusalem on December 12.

Core issues in dispute are the status of millions of Palestinian refugees, security, the borders of the new state and the fate of Jerusalem, which Israel wants, undivided, as its capital.

Addressing a sceptical domestic audience, Olmert has this week played down the importance of any deadline for ending talks and has stressed that Israel wants Abbas to make good on his road map commitments to curbing violence by Palestinian fighters before it signs any treaty. 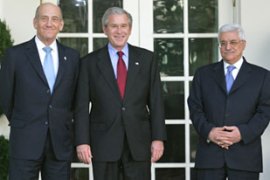 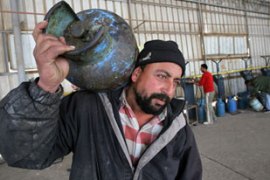 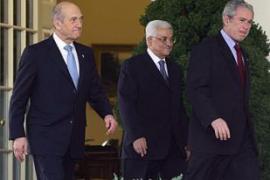 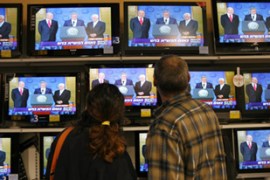