Giuliani had been the clear leader in all previous polls and only last month led the field with 33 per cent support in the survey.

Giuliani’s campaign has faced more media scrutiny in the past month.

His campaign has not put much emphasis on Iowa and New Hampshire, where candidates next month face the first contests in the state-to-state process of determining Republican and Democratic candidates in the November 2008 presidential election.

According to the opinion poll, only 37 per cent view Giuliani favourably, compared with an equal 37 per cent who have a negative impression of him.

In March, 58 per cent viewed Giuliani favourably versus only 14 per cent who saw him in a negative light, NBC reported.

Among Democrats, Hillary Clinton, the New York senator, held her national lead in the poll.

According to the survey, 45 per cent of Democratic primary voters support Clinton compared with 23 per cent for Illinois Senator Barack Obama and 13 per cent for John Edwards, former North Carolina senator.

No other Democratic candidate receives more than 4 per cent, NBC reported.

The NBC News/Wall Street Journal poll of 1,008 adults was carried out between December 14 -17 and has an overall margin of error of plus or minus 3.1 percentage points.

US congressman from president’s party defies Bush and threatens subpoenas. 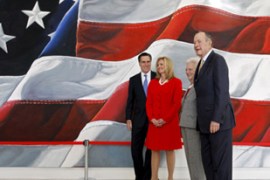 One of the party’s front-runners speaks out amid unease over his Mormon religion.