North Korea was to give a full account of its nuclear arms programme under a disarmament-for-aid deal it struck earlier this year with regional powers and the United States.
Earlier on Monday, North Korea blamed the United States for hurting the prospects for peace on the Korean peninsula with plans to attack the reclusive state.
The US government has said Washington has no plans to attack North Korea.
Nuclear arsenal
US officials estimate North Korea has produced enough plutonium for about eight nuclear weapons, and launched a secret programme to enrich uranium for weapons.
In November, Pyongyang began disabling its ageing Yongbyon nuclear complex, which was also required under the nuclear deal.
A US official who had been on hand at the site north of Pyongyang said the North has been co-operating.
The move was the first North Korea had taken to close its nuclear arms programme since it began its quest for atomic weapons in the 1980s.
North Korea, which conducted its first nuclear test in October 2006, missed a separate deadline earlier this year to freeze its nuclear plant at Yongbyon because of a dispute over its international finances.
It met its obligations once the row was settled.
If the North met the conditions of the six-nation deal, it would have received one million tonnes of heavy fuel oil or equivalent aid and Washington would have taken it off its terrorism black list, which would have enabled it to tap into international finance.
Source: News Agencies 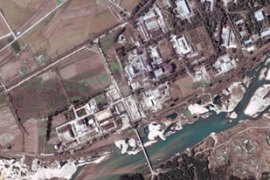 Pyongyang set to miss deadline to declare all its nuclear weapons programmes. 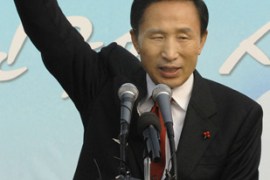