Lebanon has not had a president since November 23 due to disagreements between the ruling coalition and the opposition over the country’s political orientation.
Consensus candidate

Rival leaders have agreed on army chief General Michel Suleiman as a consensus candidate to be president but they are still wrangling over how to share power once he takes office.

The conflict reflects a regional struggle for influence between Syria and Iran on one side, and the United States and its European and Arab allies on the other.

France played a lead role in mediating the agreement on Suleiman’s candidacy and has been frustrated that the deal has not yet been completed.

Mubarak told the same news conference in Egypt that it was unacceptable that Lebanon should go for months without a president and this could lead to unspecified complications.

He appealed to Syria to use its influence in Lebanon to make sure parliament elects a new president.

“I ask Syria to intervene with the influence that it basically has in Lebanon to work to create agreement,” he said. 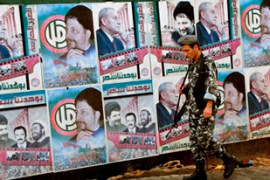 Presidential vote postponed for the 11th time and rescheduled for January 12. 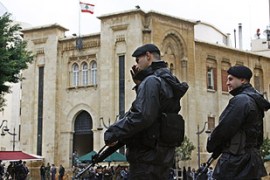 The presidency has been vacant since Emile Lahoud’s term ended four weeks ago. 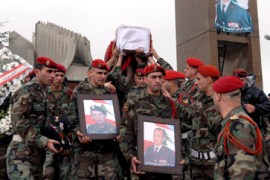 Thousands pay respects to Francois al-Hajj as Sarkozy warns of a “last chance”.