She said China’s ballooning trade surplus was not a policy decision and that Beijing was undertaking measures to correct the imbalance.
But she said Washington should not blame China for structural problems with the US economy.

“Obviously, to resort to trade protectionism and blame another country for the structural problems in the US economy is the wrong approach which would only harm the interest of the US itself,” Wu said.

China‘s currency policy and its trade surplus have dominated the economic meetings, which both sides have agreed to hold twice a year. 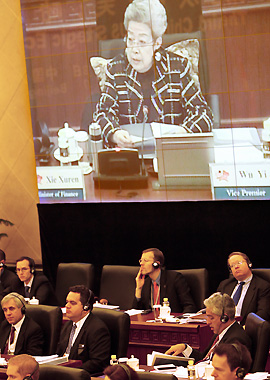 US officials have said they also intend to raise the sensitive issue of product safety, coming in the wake of a series of alerts over Chinese exports, in the current, third round of talks being held at a conference centre outside of Beijing.

Addressing the subject – and doing little to contain her irritation – Wu accused US interest groups of seizing on the issue to stir up trouble, saying it was up to the US to take “its due share of responsibility” for enforcing quality standards.

“We must oppose attempts to politicise trade issues,” she said.

Henry Paulson, the US treasury secretary, also acknowledged the mounting tensions over trade and said both countries needed to take action.

“Whereas trade was once largely a source of stability in US-China relations, it has recently become a source of tension, and not only because of safety concerns,” he said.

Paulson also warned of the danger posed by growing economic nationalism and protectionist sentiment, saying: “Neither China nor the United States can protect our way to further prosperity.”

But he urged China to implement a more flexible currency policy to ward off the risk of rising inflation and the danger its economy might boil over.

His comments came amid news that China‘s consumer price inflation hit an 11-year high in November of 6.9 per cent, up from 6.5 per cent in October.

The primary force driving the rise was food prices, which according to government figures rose 18.2 per cent in November over prices a year earlier.

Given those risks, he said, “a more flexible exchange rate policy is especially important”.

On Tuesday China reported a slight dip in its monthly trade surplus to $26.3bn for November – a drop from October’s all-time record of $27.1bn, but still the third highest ever.

The topic has become a hot political issue in the US with many politicians in congress saying China‘s managed currency policy makes its exports unfairly cheap, driving competitors out of the market and costing American jobs.

Members of both houses of congress have been debating legislation for several months, proposing punitive measures against Chinese imports if Beijing refuses to further liberalise its currency policy.

But several US multinational firms have warned that such actions could trigger a trade war.

“We urge you as leaders of congress, not to take action that could undermine US competitiveness and jeopardise national interests and goals, particularly with respect to a nation as important as China,” a letter signed by 100 CEOs of US multinationals said last month.

As yet no formal legislation has been agreed to in congress, but speculation is growing that as a US election year approaches, politicians will want to be seen taking a tougher stand.